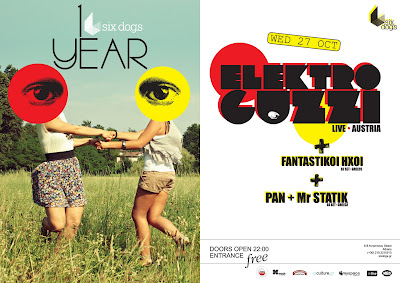 I've posted about the mighty Elektro Guzzi before (here and here) - they're an awesome live band from Austria with a traditional guitar/bass/drums structure, but the catch is that their sound rather resembles minimal techno and modern dance music (albeit with a more sophisticated sound design) than boring rock strumming.
So this wednesday the Six D.O.G.S. venue celebrates a year of successful events in art and music by bringing the boys over to play, and i'll be on the warm-up DJ duties - very excited, needless to say. After-show slots are occupied by Pan (one of the ενtechno festival masterminds) and Mr Statik who'll spin some nice tech-house and techno until dawn. Just be there!
Download: